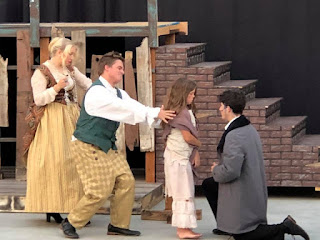 Yesterday I had the beautiful opportunity to watch my son perform as Thénardier in his community production of Les Misérables​. The story of Les Miserables is beautiful - a man, a thief, sent to prison for stealing a loaf of bread, gets released in squalor and works his way up to becoming the Mayor of his town. His nemesis, Inspector Javert, represents justice, constantly trying to ridicule and remove any of the good Valjean, who represents mercy, was doing for the world in the name of justice.

Despite everything Javert tried to catch Valjean in the act, Valjean kept caring. He was released from prison and devoted his life to God and to giving his life to others. He condemned the mistreatment of his workers in his business. And when one was thrown out behind his back he saved her from prostitution on the streets and took her in and cared for her, where they eventually fell in love.

He also rescued Cosette from slavery and trafficking by Thénardier, who I believe is as good a representation of "Satan", or an adversary, as it gets. Freely tempting and trying to purchase human beings with money and manipulate through money. He was the constant tempter. When Valjean noticed the mistreatment of Cosette by the Thénardiers he purchased her, at a great cost, and rescued her from slavery.

That was the theme of Valjean's life - constantly caring. Seeking out those oppressed by their captors and desiring to rescue them from the chains they were bound in. And Javert saw this and was constantly conflicted. Javert himself was bound by the chains of justice, and he couldn't escape those chains.

The time finally came for Valjean to rescue even Javert from his own chains. He saved his life. This caused a chain reaction of emotions in Javert, unable to handle the amazing mercy and constant caring and nonjudgement and gratitude of Valjean. Valjean never stopped caring - NO MATTER WHAT!

It fried Javert's circuits! (more on that later)

Javert was so overwhelmed at the constant giving and caring and charity of Valjean that he couldn't handle it and ended up killing himself to escape his bonds of justice, which he felt he couldn't escape. Let's hope this never needs to happen to others in this situation. Javer's lack of caring and cutting off of his own caring is where his grief was stored and it ended up in his own demise - oh if he could have only learned to keep caring like Valjean!

Is there someone in your life that you've cut off your caring for because they harmed you in some way, or you felt you could no longer care for them? Have you considered that the very thing you thought you were solving your grief with, cutting off that caring, could actually be the source of your current grief and be preventing you from being the real you that you are capable of being? Will you destroy that, and be like Jean Valjean and keep caring, despite the Javerts in your life? Will you start caring for yourself, and your inner Javerts despite what they've done to you?

Could it get any better than that?
Posted by Unknown at 12:03 PM